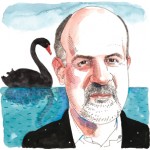 Nassim Nicholas Taleb
Looks like a preview of what to expect from the economics and econophaster establishment. Davies is the gentleman there; others have not even given a simple thougth to model error and which domains are affected by it. But asking people to explain insults can lead to pleasant surprises.

This morning, Nassim Taleb returned to Twitter, posting one of the technical appendices to his new book. And immediately he got into a wonderfully wonky twitterfight/conversation with Daniel Davies.

I don’t pretend to understand all the subtleties of the conversation between the two, but, for Tom Foster, here’s an attempt. Davies has promised a Crooked Timber post on other parts of the appendix; I’m really looking forward to that.

Nassim Taleb has posted a link to the technical Appendix II of his new upcoming book Antifragile on his website.

On his Facebook Page Nassim Taleb has linked to a new note on his Philosophical Notebook page on his website.

Nassim has released the “Medicine and Convexity (Antifragility), a summary (technical) sheet” on his Facebook Page.

A brief explanation of nonlinearities as detection of risk in medicine (from antifragile), directly from mathematical necessities, or the ideas behind Antifragile.

Nassim Taleb has linked to a new paper on his Facebook Page: How We Tend To Overestimate Powerlaw Tail Exponents

October 2012
In the presence of a layer of metaprobabilities (from metadistribution of the parameters), the asymptotic tail exponent corresponds to the lowest possible tail exponent regardless of its probability. The problem explains “Black Swan” effects, i.e., why measurements tend to chronically underestimate tail contributions, rather than merely deliver imprecise but unbiased estimates.

Nassim Taleb has shared a new paper in PDF form on his Facebook Page titled: How We Tend To Overestimate Powerlaw Tail Exponents

In the presence of a layer of metaprobabilities (from metadistribution of the parameters), the asymptotic tail exponent corresponds to the lowest possible tail exponent regardless of its probability. The problem explains “Black Swan” problems, i.e., why measurements tend to chronically underestimate tail effects, rather than merely deliver imprecise but unbiased estimates.

Lecture – Antifragile: How To Live In A World We Don’t Understand

Professor Nassim Nicholas Taleb talks about how systems, including evolution, can withstand shocks to them and are able to improve because of it and those systems that reject it, such as modern politics and banking.