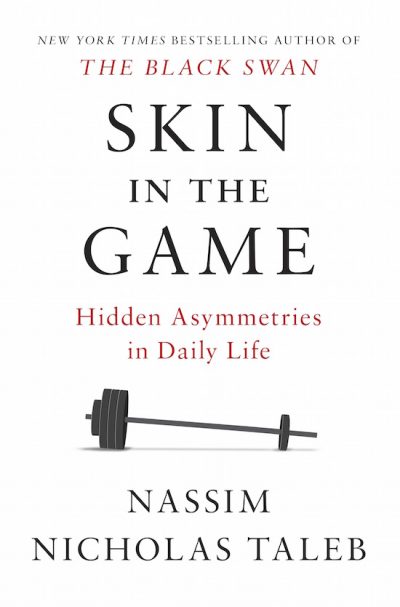 I will always remember my encounter with the writer and cultural icon Susan Sontag, largely because it was on the same day that I met the great Benoit Mandelbrot. It took place in 2001, two months after the terrorist event, in a radio station in New York. Sontag who was being interviewed, was pricked by the idea of a fellow who “studies randomness” and came to engage me. When she discovered that I was a trader, she blurted out that she was “against the market system” and turned her back to me as I was in mid-sentence, just to humiliate me (note here that courtesy is an application of the Silver rule), while her female assistant gave me the look, as if I had been convicted of child killing. I sort of justified her behavior in order to forget the incident, imagining that she lived in some rural commune, grew her own vegetables, wrote on pencil and paper, engaged in barter transactions, that type of stuff.

In a short video on the CNBC website, Nassim explains that he is voting for neither Trump nor Clinton in the upcoming election, for ethical reasons, but that he doesn’t expect Trump to do anything apocalyptic.

On facebook, Nassim recently posted the following statement about journalistic ethics in light of the current controversy over Hulk Hogan’s successful lawsuit for $140 million dollars against Gawker Media. Hulk Hogan was backed by tech billionaire Peter Thiel in his efforts:

Journalists –as any guild, care about their peers and their community more than the general public. Except that we cannot afford to have such a community engage in a conspiracy against the laymen since they represent our interests, us the lay crowd; they are supposed to stand for the general public against inner circles of power. Journalism arose from the need to expose falsehood, take risks in exposing matters detrimental to the public; in short, counter the agency problem of the powerful. But, it is turning out, the journalism model can also work in the opposite manner: members have been effective in escaping having skin in the game –only whistleblowers and war correspondents currently do.

So one can see how this severe agency problem can explode with the Gawker story. The English tabloid machine came to the U.S. in full force with Gawker, founded by a firm that specializes in dirt on the internet. By dirt I don’t mean a fraudulent transaction abetted by some power: no, the kind of dirt that takes place in bedrooms (and even in bathrooms).

In other words they want to harm citizens by disclosing their private information and posting their videos without their permission in the interest of selling information. And without being accountable for it.

Gawker having posted a video of a celebrity having sex without his permission incurred a monstrous judgment of $140 million. The suit will bankrupt Gawker. Most of all, the judgment revealed that such a predatory business model will not survive, not because it is immoral, but because it has tail risks. For America has tort laws and a legal mechanism by which people harmed by corporations can be compensated for it –a mechanism that flourished thanks to Ralph Nader. It, along with the First Amendment protect citizens by putting skin in the game of the corporations.

Gawker is trying to make a First Amendment argument and unfortunately journos appear to find this justified –while normal citizens are horrified. Liberty in the thoughts of the founding fathers was not about voyeurism, but about public matters.

Gawker argued that because the person committing sex on the video they posted was a public person, that it became a “public” matter exempted from privacy protection. People failed to see that should that argument be true, then next someone spying on any public figure should be allowed to post their bedroom activity (including Hillary Clinton, Obama, anyone)… (Gawker has ruined the lives of 21 year olds posting their sex tapes and their reaction was outrageous; in one instance their lawyer Gaby Darbyshire e-mailed the woman who was in a revenge sex tape, defending the video as “completely newsworthy” and scolding her about how “one’s actions can have unintended consequences.”)

Peter Thiel, a billionaire with a vendetta against Gawker funded a law suit. Revenge motives perhaps, but this is how the market works: Gawker tries to make money therefore they need to live with the risk of someone trying to make money from their demise.

(You make money from the demise of a 21 yo, someone will make money from yours. You make yourself a vehicle for revenge porn; you become the subject of someone’s revenge. You engage in bullying someone financially weaker than you; someone stronger will bully you. There is no reason Gawker should be the only one to use asymmetry given that their very business is asymmetry against weak people–and this is general as the media is asymmetrically strong against citizens, what is commonly called “bullying” ).
I would have personally shorted Gawker (if they were publicly listed) to make money from their collapse. And I am ready to fund lawsuits against journalists who break some intellectual rules and distort people’s positions (strawman arguments).

Any journalist who supports Gawker in the name of the First Amendments fails to understand that they as a community are committing suicide because they are trivializing the reasons behind the First Amendment –and they make it conflict with other fundamental rights. And a corporation trying to warp our sacred values should go bankrupt. And anyone, like Peter Thiel, who accelerates such bankruptcy, should be thanked.

Nassim discussed definitions of success and his own life journey in this commencement speech at the American University in Beirut. The full text of the speech, published on Nassim’s home page, is available below.

Friends, comments are invited for this draft on a philosophy paper w/ Constantine Sandis, “ETHICS AND ASYMMETRY: SKIN IN THE GAME AS A REQUIRED HEURISTIC FOR ACTING UNDER UNCERTAINTY

C. Sandis & N.N. Taleb
Abstract: We propose a global and mandatory heuristic that anyone involved in an action that can possibly generate harm for others, even probabilistically, should be required to be exposed to some damage, regardless of context. We link the rule to various philosophical approaches to ethics and moral luck.

“Those who have the upside are not necessarily those who incur the downside. For example, bankers and corporate managers get bonuses for “performance,” but not reverse bonuses for negative performance, and they have an incentive to bury risks in the tails of the distribution –& in other words, to delay blowups.

The ancients were fully aware of this incentive to hide risks,& and implemented very simple but potent heuristics. About 3,800 years ago, the Code of Hammurabi specified that if a house collapses and causes the death of its owner, the house’s builder shall be put to death.”