On facebook, Nassim recently posted the following statement about journalistic ethics in light of the current controversy over Hulk Hogan’s successful lawsuit for $140 million dollars against Gawker Media. Hulk Hogan was backed by tech billionaire Peter Thiel in his efforts:

Journalists –as any guild, care about their peers and their community more than the general public. Except that we cannot afford to have such a community engage in a conspiracy against the laymen since they represent our interests, us the lay crowd; they are supposed to stand for the general public against inner circles of power. Journalism arose from the need to expose falsehood, take risks in exposing matters detrimental to the public; in short, counter the agency problem of the powerful. But, it is turning out, the journalism model can also work in the opposite manner: members have been effective in escaping having skin in the game –only whistleblowers and war correspondents currently do.

So one can see how this severe agency problem can explode with the Gawker story. The English tabloid machine came to the U.S. in full force with Gawker, founded by a firm that specializes in dirt on the internet. By dirt I don’t mean a fraudulent transaction abetted by some power: no, the kind of dirt that takes place in bedrooms (and even in bathrooms).

In other words they want to harm citizens by disclosing their private information and posting their videos without their permission in the interest of selling information. And without being accountable for it.

Gawker having posted a video of a celebrity having sex without his permission incurred a monstrous judgment of $140 million. The suit will bankrupt Gawker. Most of all, the judgment revealed that such a predatory business model will not survive, not because it is immoral, but because it has tail risks. For America has tort laws and a legal mechanism by which people harmed by corporations can be compensated for it –a mechanism that flourished thanks to Ralph Nader. It, along with the First Amendment protect citizens by putting skin in the game of the corporations.

Gawker is trying to make a First Amendment argument and unfortunately journos appear to find this justified –while normal citizens are horrified. Liberty in the thoughts of the founding fathers was not about voyeurism, but about public matters.

Gawker argued that because the person committing sex on the video they posted was a public person, that it became a “public” matter exempted from privacy protection. People failed to see that should that argument be true, then next someone spying on any public figure should be allowed to post their bedroom activity (including Hillary Clinton, Obama, anyone)… (Gawker has ruined the lives of 21 year olds posting their sex tapes and their reaction was outrageous; in one instance their lawyer Gaby Darbyshire e-mailed the woman who was in a revenge sex tape, defending the video as “completely newsworthy” and scolding her about how “one’s actions can have unintended consequences.”)

Peter Thiel, a billionaire with a vendetta against Gawker funded a law suit. Revenge motives perhaps, but this is how the market works: Gawker tries to make money therefore they need to live with the risk of someone trying to make money from their demise.

(You make money from the demise of a 21 yo, someone will make money from yours. You make yourself a vehicle for revenge porn; you become the subject of someone’s revenge. You engage in bullying someone financially weaker than you; someone stronger will bully you. There is no reason Gawker should be the only one to use asymmetry given that their very business is asymmetry against weak people–and this is general as the media is asymmetrically strong against citizens, what is commonly called “bullying” ).
I would have personally shorted Gawker (if they were publicly listed) to make money from their collapse. And I am ready to fund lawsuits against journalists who break some intellectual rules and distort people’s positions (strawman arguments).

Any journalist who supports Gawker in the name of the First Amendments fails to understand that they as a community are committing suicide because they are trivializing the reasons behind the First Amendment –and they make it conflict with other fundamental rights. And a corporation trying to warp our sacred values should go bankrupt. And anyone, like Peter Thiel, who accelerates such bankruptcy, should be thanked.

Recently on twitter, Nassim  shared this chart comparing outcomes with Clinton as president versus Trump.  In response to a question about Sanders versus Trump, he tweeted: “Bernie v. Trump I go Bernie because his domestic policies won’t go through and his foreign policies are clearer.” 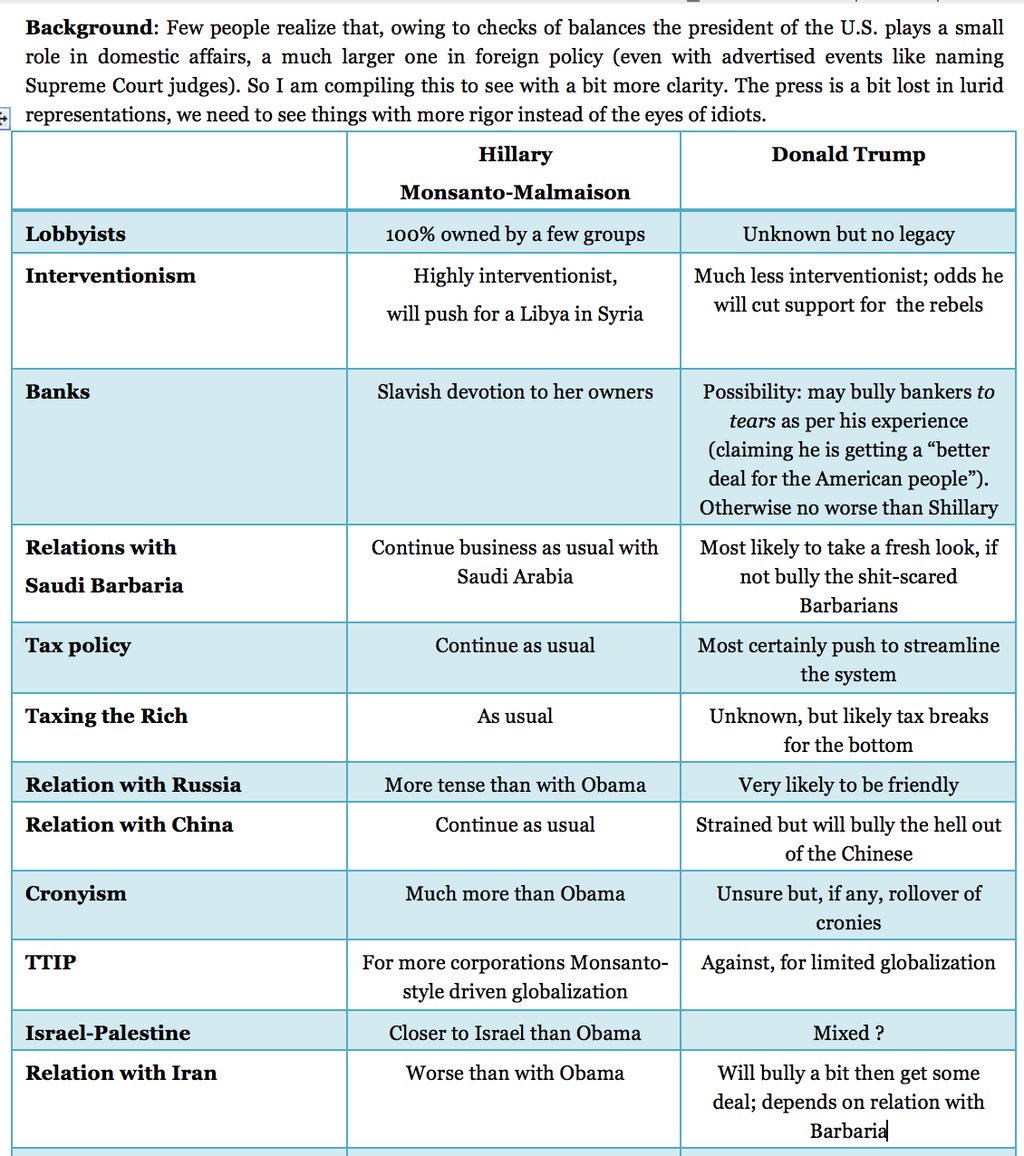 He also followed up with these tweets: “Hillary and Bush have done the most to harm minority populations in the Levant & Iraq since Genghis Khan.” “2/What I mean by rigorous is not making assumptions/ certainties when there is uncertainty. Shillary offers certainties, Trump fewer ones.”

Over at The Market Oracle, James Quinn expands on Nassim’s idea (now widely circulating on social media) that votes for Trump (and to a lesser degree, Bernie Sanders) are emotion-drive votes to destroy the established order of government.

The following article by Mark Buchanan was recently published on Medium. It discusses recent analysis by Nassim, along with Pasquale Cirillo, of historical warfare statistics. This analysis contradicts the popular idea that future violent wars are unlikely:

Violent warfare is on the wane, right?

Many optimists think so. But a close look at the statistics suggests that the idea just doesn’t add up.

A spate of recent and not so recent books have suggested that “everything is getting better,” that the world is getting more peaceful, more civilized, and less violent. Some of these claims stand up. In his book The Better Angels of Our Nature, psychologist Steven Pinker made the case that everything from slavery and torture to violent personal crime and cruelty to animals has decreased in modern times. He presented masses of evidence. Such trends, it would certainly seem, are highly unlikely to be reversed.

Pinker also suggested — as have others, including historian Niall Ferguson — that something big has changed about violent warfare since 1945 as well. Here too, the world seems to have become much more peaceful, as if war is becoming a thing of the past. As he wrote,

… wars between great powers and developed nations have fallen to historically unprecedented levels. This empirical fact has been repeatedly noted with astonishment by many military historians and international relations scholars…

Pinker admits that this might be a statistical illusion; perhaps we’ve just experienced a recent lull, and war will resume with its full historical fury sometime soon. But he thinks this is unlikely, for a variety of reasons. These include…

the fact that the drop in the frequency of wars among great powers and developed states has been so sudden and massive (essentially, to zero) as to suggest a qualitative change; that territorial conquest has similarly all but vanished in the planning and outcomes of wars; that the period without major war has also seen sharp reductions in conscription, length of military service, and per-GDP military expenditures; that it has seen declines in every exogenous variable that are statistically predictive of militarized disputes; and that war rhetoric and war planning have disappeared as live options in the political deliberations of developed states in their dealings with one another. None of these observations were post-hoc, offered at the end of a fortuitously long run that was spuriously deemed improbable in retrospect; many were made more than three decades ago, and their prospective assessments have been strengthened by the passage of time.

Again, Pinker has gone to lengths to emphasize that none of this proves anything abut future wars. But it is strongly suggestive, he believes, that this is significant evidence for such a belief.

Nassim Taleb criticized Pinker’s arguments a few years ago, arguing that Pinker didn’t take proper account of the statistical nature of war as a historical phenomenon, specifically as a time series of events characterized by fat tails. Such processes naturally have long periods of quiescence, which get ripped apart by tumultuous upheavals, and they lure the mind into mistaken interpretations. Pinker responded, clarifying his view, and the quotes above come from that response . Pinker acknowledged the logical possibility of Taleb’s view, but suggested that Taleb had “no evidence that is true, or even plausible.”

That has now changed. Just today, Taleb, writing with another mathematician, Pasquale Cirillo, has released a detailed analysis of the statistics of violent warfare going back some 2000 years, with an emphasis on the properties of the tails of the distribution — the likelihood of the most extreme events. I’ve written a short Bloomberg piece on the new paper, and wanted to offer a few more technical details here. The analysis, I think, goes a long way to making clear why we are so ill-prepared to think clearly about processes governed by fat tails, and so prone to falling into interpretive error. Moreover, it strongly suggests that hopes of a future with significantly less war are NOT supported by anything in the recent trend of conflict infrequency. The optimists are fooling themselves.

Anyone can read the paper, so I’ll limit myself to simply summarizing a few of the main points:

There are quite few other gems in the analysis, but these seem to me to be the most important.

One final thing, and maybe this is most important. Cirillo and Taleb make a strong argument that the quantity that one should study and try to estimate from the statistics is the tail exponent α (see point 5 above). This is certainly not easy to estimate, and it takes a lot of data to get even a crude estimate, but working with α is a much better way of getting at the true mean of the process than working with the sample mean over various periods. Looking at past events, and estimating the average number over any period, is simply a bad way to go about thinking about any process of this kind. The sample mean is NOT a mathematically sound estimate of the true mean of the process. For more on this, see Taleb’s comments at the top of the 3rd page of his earlier criticism of Pinker’s argument.

And that, I think, is pretty good reason to believe that all talk of the dwindling likelihood of wars based on recent past experience is mostly based on illusion and people telling themselves convincing but probably unfounded stories. Sure it looks as if things are getting more peaceful. But, looking at the mathematics, that’s exactly what we should expect to see, even if we’re most likely due for a much more violent future.

Nassim’s statement on climate models, along with Joseph Norman, Rupert Read, and Yaneer Bar-Yam. He says, “We have *only one* planet and need to learn to live with imperfection of models.” 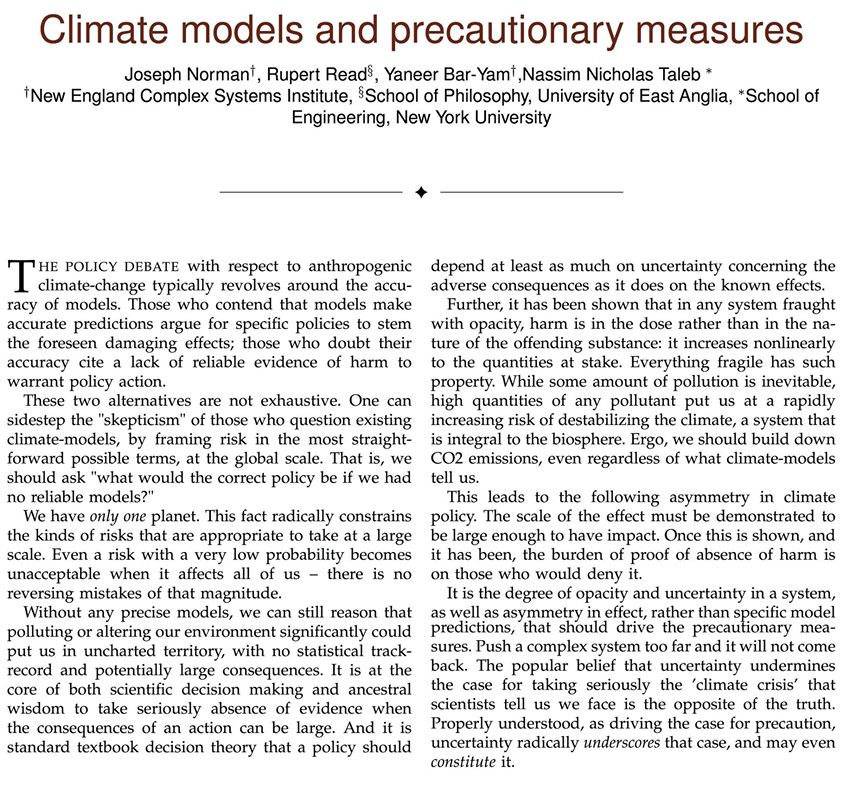