Nassim will be a featured presenter at the New England Complex Systems Institute’s five day certificate program in Complexity and Data Analytics, Risk & Opportunity, and Implications for Strategy and Policy from May 1-5, 2017, in Washington, D.C. Please visit the site for more details.

When people get rich, they shed their skin-in-the game driven experiential mechanism. They lose control of their preferences, substituting constructed preferences to their own, complicating their lives unnecessarily, triggering their own misery. And these are of course the preferences of those who want to sell them something. This is a skin-in-the-game problem as the choices of the rich are dictated by others who have something to gain, and no side effects, from the sale. And given that they are rich, and their exploiters not often so, nobody would shout victim.

I once had dinner in a Michelin-starred restaurant with a fellow who insisted on eating there instead of my selection of a casual Greek taverna with a friendly owner operator, his second cousin as a manager and his third cousin once removed as a receptionist. The other customers seemed, as we say in Mediterranean languages, to have a cork plugged in their behind obstructing proper ventilation, causing the vapors to build on the inside of the gastrointestinal walls, leading to the irritable type of decorum you only notice in the educated upper classes. I note that, in addition to the plugged corks, all men wore ties.

The best enemy is the one you own by putting skin in his game and letting him know the exact rules that come with it. You keep him alive, in the knowledge that he owes this to your benevolence. The notion that an enemy you own is better than a dead one was perfected by the order of the Assassins, so we will do some digging into the work of that secret society.

Nassim discusses “how ‘evidence’ about the risk of terrorism as shown in the NYT and by BS vending journos makes no sense statistically” and  “explains the difference between classes using principles of Extreme Value Theory EVT without any math.”

Nassim gave this lecture on tail risk measurement heuristics at the One Bank Flagship Seminar.

(Background. The Black Swan explains the domain-dependence of expertise: why the electrician, dentist, are experts, while the journalist, State Department bureaucrat, and macroeconomist are not. Since then, there has been a global movement against the pseudo-expert, the serial incompetence of a certain class of babbling and pompous operatives across bureaucrato-academic professions. Which leads to the question: who is the real expert? Who decides on who is and who is not expert? Where is the metaexpert? Time it is. Or, rather, Lindy.)

Lindy is a deli in New York, now a tourist trap, that proudly claims to be famous for its cheesecake, but in fact has been known for the fifty or so years of interpretation by physicists and mathematicians of the heuristic that developed there. Actors who hung out there gossiping about other actors discovered that Broadway shows that lasted, say one hundred days, had a future life expectancy of a hundred more. For those that lasted two hundred days, two hundred more. The heuristic became known as the Lindy Effect.

The first is the inequality people tolerate, such as one’s understanding compared to that of people deemed heroes, say Einstein, Michelangelo, or the recluse mathematician Grisha Perelman, in comparison to whom one has no difficulty acknowledging a large surplus. This applies to entrepreneurs, artists, soldiers, heroes, the singer Bob Dylan, Socrates, the current local celebrity chef, some Roman Emperor of good repute, say Marcus Aurelius; in short those for whom one can naturally be a “fan”. You may like to imitate them, you may aspire to be like them; but you don’t resent them.

The second is the inequality people find intolerable because the subject appears to be just a person like you, except that he has been playing the system, and getting himself into rent seeking, acquiring privileges that are not warranted –and although he has something you would not mind having (which may include his Russian girlfriend), he is exactly the type of whom you cannot possibly become a fan. The latter category includes bankers, bureaucrats who get rich, former senators shilling for the evil firm Monsanto, clean-shaven chief executives who wear ties, and talking heads on television making outsized bonuses. You don’t just envy them; you take umbrage at their fame, and the sight of their expensive or even semi-expensive car trigger some feeling of bitterness. They make you feel smaller.

Nassim has posted the prologue of Skin in the Game on twitter: 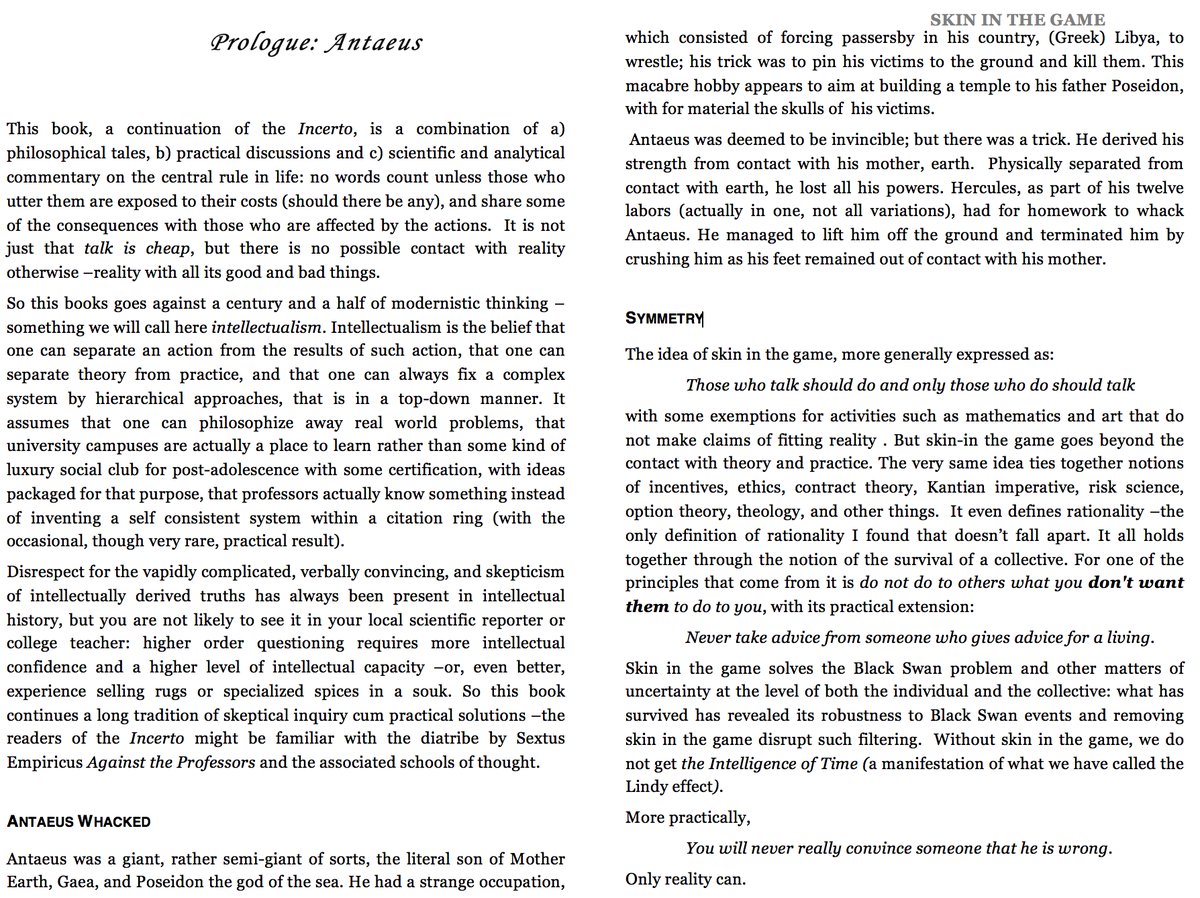